When you are tackling something as big as the width of Lake Tahoe, it helps to have a calm and experienced hand on the rudder. Jeri Gintert says she didn’t have enough swimming experience to be confident in her own abilities or calm about anything. But she was confident in her coach, Joel Wilson, 63, of Santa Cruz Masters.

Gintert, 51 and a member of Santa Cruz Masters wanted to do a big swim to mark surviving eleven years with cancer. “I was diagnosed with non-Hodgkin’s lymphoma in 1999. After radiation, I realized that I was feeling betrayed by my body,” she explains. “I was a piano teacher and sat for six hours a day. I did nothing physical.” Gintert felt utterly unprepared for the lexicon of being a cancer patient: battle, struggle, fight, war, win, beat.

So she decided to get in shape and get back in the pool. Gintert swam by herself for a year before joining Masters; she was sure it was only for elite athletes. When a friend persuaded her to give it a try and she found not only the gentle and encouraging Wilson on deck but swimmers of multiple abilities in the water, she felt quite comfortable and hasn’t looked back. The first practices, she told herself she just had to get through the warm up.

Her open water journey started in 2001 with the Lake Berryessa 1-mile swim that she agreed to do in order to help a friend. She was hooked. Then in 2002, her lymphoma moved to her left eye. She discovered this tumor during a morning swim thanks to ill-fitting goggles. In 2004, small tumors appeared in her abdominal area. She was put on the classic "watch and wait" program with yearly MRIs, CTs and blood work.

As she gained experience in both her swimming and her cancer battle, she wanted to tackle a bigger challenge to prove to herself that her body was strong enough to keep fighting. This past year, she didn’t want to wait; she wanted to celebrate an anniversary.

Picking a swim was the hard part until Wilson suggested Tahoe. Gintert’s family had long vacationed there and she already felt a deep connection with the lake. Plus, having done most of her swims in the Monterey or San Francisco bays, she was pleased about the possibility of shelving her shark and sea life worries for a long swim.

She describes the day of the swim: “On September 17th, I got into a pilot boat in the dark at 5:30 am with my husband Doak, daughter Alyssa and coach Joel.  Joel counted my strokes and fed me on schedule with a Nalgene on a rope and hot tea. It did not seem long, and since I was only sighting on the boat, I had no idea where I was. Joel wouldn’t tell me either. He would just say to keep doing what I was doing.” Joel said to swim hard for twenty strokes and cruise for ten.  I told him it was hard to count strokes and blessings! To see my body get strong enough to accomplish this and to realize the power of encouragement was beyond huge.” 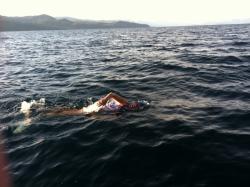 Joel had her swimming 4,500 per day for six days at the peak. Gintert tracked those workouts on the USMS fitness log. Tossed in to this would be a 6,500 session sometime during the week. She started swimming doubles when the schedule did not allow her to get in 4,500 within a workout. She did one four hour ocean swim with Wilson alongside her in a boat and then swam the length of Donner Lake and back (a total of 5.4 miles) the month before. (Both Gintert and Wilson swam the race on way and Wilson paddled a canoe back while Gintert swam a second “lap.”)

As for what’s next, Gintert is tempted by the idea of swimming the length of Lake Tahoe which is 22 miles and possibly the English Channel, particularly if Wilson is by her side.

As for her lymphoma, she’s still in “watch and wait” mode. “I kind of forget about it until my appointments. Swimming helps keep the focus on being thankful for each day and what I can do. Swimming has saved my life. The swim was a dream come true.”

See a video of her swim and notice her amazing smile and her casual stroll up on land at the finish. Also you can check out the new Lake Tahoe Swimming Society formed to help swimmers plan their crossings.

How to Train for a Long Open Water Race