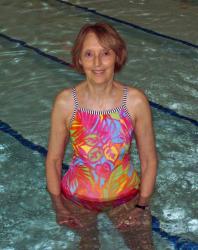 "I should've been a fish because I love to be in the water. Everything I do revolves around water including my jobs, my vacations, my spare time, and teams that I coach. It is so peaceful in the water and my mind forgets all the stressful things in life," says Margaret Godwin.

Her neighborhood opened up a pool when she was eight years old and her parents made her take swim lessons. She hated them. But it didn't take long for her to become a good swimmer and enjoy being in the pool. One day the swim coach asked her to join the swim team and she was hooked. There were no starting blocks, no fins, no paddles, no goggles, and the kids rode their bikes to swim practice. Godwin's brother and sister joined the team and she has wonderful memories of their summer swim league.

Godwin was not interested in swimming year-round because she liked to play other sports. The high school and college she attended had no girls swim team. She participated in "water ballet," better known today as synchronized swimming. She got involved again with a swim team when her son and daughter were young. It brought back memories of her youth with all the kids and their families attending swim meets every week. Godwin started to help coach the summer team and 20 years later she is still doing so. She loves watching the kids improve their strokes and get faster by the end of July. "It is getting tough to coach outside in the summer heat, but I still enjoy it a lot. And I get a good tan," she says.

Godwin's daughter excelled at swimming and was a year-round swimmer. At age 11 she wanted to swim for a team that was an hour away from her home. It was a big commitment. For four years they drove 100 miles four times every week so her daughter could get better coaching. The coach let Godwin have a lane so she could swim during their practices. She was crushed when her daughter decided to stop swimming at age 15. She didn't know what to do with her free time. She missed swimming. And so she started coaching the young kids on the YMCA swim team and continued to coach the summer team. She went to meets with the YMCA and she was happy to be involved with swimming again.

When she was 60 years old she needed a challenge. She stayed fit by weight lifting and using the treadmill and was tired of that routine. She heard about the Senior Games and decided to enter the swim competition. Godwin's town has no indoor pool, but since she was working at the YMCA, she had a place to practice. She had not competed in a swim meet since she was 16 years old. The night before the Senior Games Godwin started to get really nervous. Her main concern was diving off the blocks and hoping her goggles would stay on.

Things got worse during warm-ups. The pool was so deep, there was a bulkhead, and the lines on the bottom were confusing. She thought: "what in the world am I doing here, I'm going to embarrass myself." It was time for Godwin's first event and her heart was pounding. She put on her goggles and couldn't see the step on the starting blocks. "Great", she thought, "I'm the youngest swimmer here and I need help getting on the blocks." Somehow everything worked out fine and Godwin won all of her events. It was a fun atmosphere and she enjoyed the day. Godwin was encouraged to join the Masters program and participate in the meets. She discovered there is no coach and there are no Masters team practices at her pool so she would have to motivate herself. Godwin swam in the N.C. Masters Championship that spring and was she shocked when she got there. "Most of the swimmers had on the tech suits and seemed very serious. "I had on my two- year-old Dolphin Uglies suit! I still got very nervous before my races but had another successful meet and met some new friends," she says.

Godwin has swum in two Senior Games meets and two N.C. Masters Championship meets. She enjoys the competition and challenging herself to improve. She would love to live in a town with an indoor pool, a coach, and a bunch of teammates. And then she discovered GTD last fall. Because she has a very busy schedule she tried to swim 50 miles in three months. GTD made her find time to swim so she could reach her goal. In January Godwin signed up for another 50 miles. "Swimming is a very important part of my life. I work at the YMCA pool, I train lifeguards, coach the YMCA mini-racers, coach a high school team, and coach the summer league team. When I take a break I'm usually at the beach. I am proud to say that I AM HOOKED ON SWIMMING!"

About the Author
Greta Van Meeteren