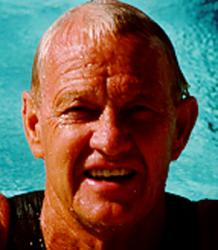 Along with Ron Johnson, Graham Johnston was the most successful male septuagenarian in 2001. The Houston-based freestyle expert who swims for Masters of South Texas had an incredible year starting with short course yards, when he set six national records and earned six number one rankings. He controlled the middle-distance and distance freestyle events from the 200 to the 1650, as well as both individual medleys.

During the long course season, Johnston stroked to five new world records, five national records and five number one rankings. Of those, four were in freestyle (from 200 through 1500 meters) plus the grueling 400 IM.

The 1500-meter freestyle was, perhaps, his most satisfying victory. From virtually the first lap, Johnston was swimming faster than any man over 70 had ever swum. A metric mile later, he touched in 20:36.56, an astounding two minutes faster than the previous world record.

Johnston seeking greater challenges set his sights on international achievements. He won two gold and two silver medals in each of the 1950 and 1954 Commonwealth Games held in New Zealand and Canada.

1952 was truly a banner year for Johnston. He was selected to represent South Africa in the Olympic Games held in Helsinki that year. Plus, he met his wife-to-be, Janis. The two married in 1955 and went on to have five children.

Johnston was a pioneer in college athletics. One of the first foreign-born athletes to enjoy a full scholarship at an American college, Johnston received a full scholarship for swimming at the University of Oklahoma. While there, he achieved NCAA All-American status three consecutive years.

As many future Masters tend to do, Johnston retired from competitive swimming between 1956 and 1972. But at the age of 41 he returned to the sport and in 1973 swam in his first Masters nationals in Santa Monica, Calif.

Johnston's swimming success has blossomed as a Master. In addition to Johnston's world records in short and long course, he holds six national short course records and seven national long course records. He also holds all national freestyle records in the distances ranging from 100 yards through 10K in the 65 to 70 age group. He has won the Waikiki Rough Water Swim eight years in a row (1993-2000). And he is the only person to hold all seven USMS national long distance records in any age group.

Johnston reached the ultimate goal for a swimmer in 1998 when he was inducted into the International Swimming Hall of Fame. But today at age 69, Johnston continues to push himself, using new training techniques allow him to retain his speed. His 1650 yd. national record is just five seconds slower than the time that won him the gold medal at the Commonwealth Games in 1950.

Most recently, Johnston won gold in the 200-meter free, 400-meter free, 800-meter free, the 400-meter IM and the 5k open water swim (in 67 degree water) at the World Masters Swimming Championship in Munich, Germany. In September 2000 he will compete in two other of his record holding events, the 10-mile Lanai Island to Maui Island relay. Also, while in Hawaii he will compete in the 3.5 mile Waikiki, Hawaii rough water swim where he is the only man over 60 to swim the distance in less than an hour.

Johnston's career is not over by any measure. He has his sights on setting the records in many other age groups to come. He is a true Master of the sport of swimming.

Once Graham Johnston aged up to the 65-69 age group he devastated the distance freestyle records, shattering the 1500 world record by over two minutes! His 20:16.54 was only 48 seconds slower than his 1952 Olympic swim of 19:27.1. Not having the guidance of a coach during his Olympic career, Johnston doesn't think he was pushed to his full potential. "I think I work out harder now than I did in college." He also attributes his success to a healthy lifestyle—no smoking or drinking—and a healthy diet.

A native of South Africa, Johnston graduated from the University of Oklahoma and has lived in the States since 1958. He just retired and does not consider his current coaching a real job. "That keeps me in pocket money and out of trouble."

Johnston also got into open water swimming four years ago. He holds the records in both the 60+ and 65+ age group in the Waikiki Rough Water Swim and is the oldest and fastest to have completed a 7k ocean swim from Robben Island, where Nelson Mandela was imprisoned, to the mainland of South Africa, finishing in two hours, four minutes.

One of Johnston's goals is to make it into the Hall of Fame. "Whether I'll ever do it or not, I don't know. The goal I have every year is just to try to be as good as I was the previous year...or a little bit better." Johnston's wife Janis accompanies him to all his meets. "She's my best supporter," he says, "and I couldn't do it without her. She wouldn't let me go by myself. She knows I'd get in trouble."

About the Author
P H Mullen

Four Storylines to Watch at the Olympics and Paralympics

How Hard Should I Work the Triathlon Swim

How to Develop a Training Plan for an Injured Swimmer