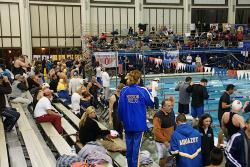 "We're victims of our own success," summarized a jubilant (and tired) meet director Kenny Brisbin, as the SPMA SCM 2009 Regional Championship—also known as the Belmont Meet—neared its conclusion on Sunday, Dec. 6, after three very successful days of competition in Long Beach, Calif.

Organized and sponsored by the Long Beach Grunions, the 2009 SPMA Regionals were the largest ever for this event, attracting a record 650 swimmers from all different levels and age groups. The three-day regional championship is one of three annual championship meets offered by SPMA throughout the year. The Grunions’ meet is by far the largest and arguably the most significant event held in the region each year.

This year, the meet drew swimmers from as far away as North Carolina, Texas, Hawaii, and Calgary, Canada. In addition to these faraway guests, many teams from all over the Southwest Zone (California, Nevada, and Arizona) traveled to Long Beach to compete. The competition also included many incredibly talented swimmers from the largest Southern California teams, including the Irvine Novaquatics, Mission Viejo Nadadores, UCLA Bruin Masters, West Hollywood Aquatics, and Southern California Aquatics (SCAQ), just to name a few.  In total, swimmers representing over 60 different swim clubs participated in the event.

Besides being possibly the largest regional championship ever in U.S. Masters Swimming history, the 2009 SPMA SCM Regionals lived up to the reputation of being a very fast competition. By the end of the meet on Sunday, swimmers had broken 60 individual world and/or national records at the Belmont Meet, also a record for this competition. In addition, 47 relay records were also broken during the meet.

Several times during the meet, the excitement at the pool was palpable, as Tom Boyd, the official meet announcer, pumped up 600+ athletes and spectators to root for fast swimmers as they shattered world records, in some cases by a large margin. 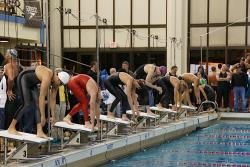 "The meet has been so successful in previous years, that we keep attracting more and more swimmers from all over the country, despite the economic crisis," says Kenny Brisbin. Despite running a

little long on Friday and a bit behind schedule overall, Brisbin says the feedback from coaches and swimmers has been overwhelmingly positive.

Volunteer coordinator Yuji Utsumi shared Brisbin's enthusiasm. For him, the success of the meet owed a lot to the dedication of the many volunteers. Utsumi estimated that at least 25 non-Grunion volunteers (not to mention dozens of Grunions) worked at the 2009 SPMA Regionals, making it the Grunions’ largest meet ever in number of volunteers as well.

"Sometimes our volunteers don't even realize how much of an impact they're having," says

Utsumi. "The whole Long Beach community is represented here, not only the gay and lesbian community, and it also reflects wonderfully on the image of the city," he adds.

Grunion team captain Mike Miranda agreed. "Many of those 600+ swimmers stay in Long Beach for a few days, so it also helps the city and the local economy," he says. Miranda hopes the city will be more pro-active in upcoming years in their support of the Grunions and the SPMA Regional Championships.

Great Way to Wrap Up

Miranda believes the Belmont Meet is a "fantastic way to end a great year for the Grunions". At the pool during the meet, he was particularly impressed with how much Grunion Pride the event instills in the Long Beach team members.

"It's wonderful to see all those Grunions who are not so active with the team anymore come back to help us with the meet. They do that because they feel proud of the team and still connected to it," says Miranda.

So, after so many world records shattered and a record number of swimmers and volunteers involved, where does the Belmont Meet go from here?

"We'll tweak it and make it even better next time," says Miranda. "This year we used Club Assistant to run the meet and that made us even more efficient. Maybe next year we'll tweak something else, and make the meet even better!"

Since the team formed in 2002, the Grunions have gained a great deal of notoriety in the adult swimming world of U.S. Masters Swimming. As members of International Gay & Lesbian Aquatics (IGLA), the team has made a strong showing in the annual IGLA Championship Meet every year since 2003, which has included the 2006 Gay Games in Chicago, and the 2009 World OutGames in Copenhagen.  Coming up in July 2010, the team plans to participate in their second Gay Games in Cologne, Germany. Three of the past seven years, the Grunions have earned first place in the medium-sized team category at the annual IGLA meets.

Just a few of the 60 individual world and/or national records broken at the SPMA Regional Championships in Long Beach, Dec. 4-6, 2009:

Just a few of the 47 relay world and/or national records broken:

For a complete list of records broken at the 2009 SPMA Championship, go to lbgrunions.org/results

About the Author
Raul Reis