So many achievements and records 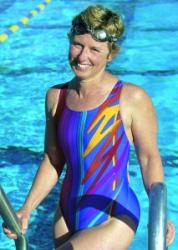 For this young lady, it all began as an age group swimmer at the age of 12. As part of a military family, she moved from place to place, home to home, resulting in many coaches who gave her a foundation for what was to come later in Master swimming. Coaches Flip Darr, Jack Simon and Mike Troy at the Coronado Swim Club in California, Shelley Mann and Ed Solitar in Virginia, Tom Haynie and Soichi Sakamoto in Hawaii and at the Punahou School all gave her a base of sound swimming skills. And, for some of her swimming years, she was self-coached, a condition that was to plant the seed for success in her mind as she began to excel in Masters swimming later in life.

She is a hard and intense competitor who has set records in six age groups beginning with the 25-29 group. She has been a USMS All-Star for nine years and an All-American 32 times, 11 of those in long distance. She is the first woman over age 40 to break 19 minutes in the 1650-yard free and the first over age 50 to break 20 minutes in the 1500-meter and 1650-yard.

First as a bio medical researcher in biology and immunology and now as a full time finance office manager in her husband's firm, Barbara continues to make time for Masters and continues to set records.

She has received the USMS Distinguished Service Award (1977) and has served on numerous committees of the San Diego-Imperial Local Masters Swimming Committee and Board of Directors, and as the San Diego Swim Masters administrator and newsletter editor/publisher. She is a certified Masters official, referee, starter; the works, and still finds time to volunteer tutor in math, science and reading at the local elementary and middle schools.

The text above is from the ISHOF website and was written for Barbara's induction into the International Swimming Hall of Fame.

Barbara was inducted into the International Masters Swimming Hall of Fame in 2003.

In setting over a dozen USMS records in freestyle, butterfly, IM, and long distance events, Barbara Dunbar has achieved star status in the pool. But her greatest achievement yet may be her contribution to United States Masters swimming as a volunteer.

Since entering the world of Masters swimming in 1976, Barbara has handled several administrative chores in the San Diego area. She has served as meet director for over 100 Masters meets and has handled the duties of compiling Top Ten times and records for San Diego-Imperial LMSC. She has benefited her team, San Diego Swim Masters, by serving as president of the club and by editing and distributing the SDSM monthly newsletter.

On a national level, she helped establish an LMSC Officials Certification Program while working as a USMS referee, starter, and stroke and turn judge. Barbara also has served on the USMS Ad-Hoc One Event Registration Committee.

For her accomplishments both on the pool deck and in the water, USMS salutes Barbara Dunbar!