USMS Members South of the Border

Competing in the Pan American Masters Swimming Championship in Veracruz, Mexico, turned into an adventure of sorts for a group of U.S. Masters Swimming members. The event, held the week of October 27th through November 1st, was the largest in the four-year history of the meet. There were 741 competitors representing eight different countries including 26 swimmers from the U.S.

On the first day of the meet, the swimmers were awakened at 4:52 a.m. by an earthquake that shook the colonial port city on the Gulf of Mexico. The quake measured 5.4 on the Richter scale and was centered 44 miles away in the Gulf. Thankfully, there were no injuries or damage.

During the first three days of the meet, the weather was sunny, 90 degrees and humid. On Friday a front came through and the temperature dropped ten to fifteen degrees. The wind picked up with sustained speeds of thirty miles with higher gusts for Saturday and Sunday’s competition. “It was like swimming in the Gulf instead of a pool,” says Barbara Protzman of Gold Coast Masters.

The event was very friendly with keen competition. “The hospitality provided by the Mexican Swimming Federation was beyond reproach,” says Mel Goldstein, U.S. Masters Swimming’s club and coach services coordinator and representative to the Amateur Swimming Union of the Americas. Goldstein is also chair of the Masters Technical Committee for UANA, and is excited about the growth of the Pan-Ams; four years ago, the inaugural event attracted only 150 swimmers. 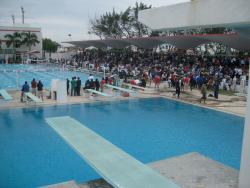 Still, the American swimmers found the facilities and safety standards in Mexico quite different than what they are accustomed to back home. The locker rooms were clean but Spartan. The showers were tiny and had no hot water, and there were no benches, which made donning tech suits a bit tricky.

The warm-up pool had no lane lines, no backstroke flags or lifeguards, and swimmers could dive off any blocks whenever they wanted. The touch pads in the competition pool were not well secured, says Protzman, adding that one flipped up during one of her backstroke turns. There were no lap counters for the 400 free. And while officials operated counters for the 800 free, they would not put them in the water because they said it would be too dangerous. They also counted down instead of up.

Anthony Thompson of MOVY Masters and the USMS Board of Directors has traveled extensively, competing in several different countries, “You learn to temper your expectations when it comes to the way things are done,” he says, speaking of the differences in facilities and procedures. “Swimming is an international language, once you dive off the blocks, everyone is racing for time.” Thompson, who loves to combine his love of both swimming and travel, says the differences are always outweighed by the warm welcome he has felt at practices and meets all over the world.

By all accounts, the community of Veracruz went great lengths to make the athletes feel welcome. The opening ceremonies were quite elaborate with a small parade with flags from the different Pan American countries, the presenting of the colors by members of the Mexican Navel Academy, and a music and dance performance in the folkloric Jarocho style that is traditional of Veracruz.

“Overall I think the USMS swimmers did very well,” says Goldstein. While the winning team was Sports City, a club from Mexico City, the U.S. teams placed well and according to Goldstein, most everyone made good times. Thompson agrees, adding, “I had some fantastic swims; it is great to see training and taper come together like that.”

Throughout the five-day meet, swimmers found time to go out on the town and enjoy some of the local flavor Veracruz had to offer. But when the meet was over, more adventure awaited some of the Florida swimmers. On the flight back to Miami from Mexico City, the emergency oxygen masks popped out of their compartments on the ceiling of the plane. There were no announcements from the crew, only looped, pre-recorded instructions in four languages explaining how to use the masks. The Mexicana airplane had a mechanical problem and had to return to Mexico City, flying at a low altitude. The plane landed safely in Mexico City and the swimmers had to wait several hours for another plane, but all arrived safely back in the U.S., albeit later than they had anticipated.

Five Reasons Why You Should Join USMS

What Makes a Fast Pool Fast