Some Older Swimmers Are Not Slowing Down

There is a close relationship between swim speed and aging, but it is not what you think.

Jerry Meyer collected and analyzed the top ten times of 50 and 200 yard backstrokers from several decades. His teammate and coach, Mike Jacobson, 43, alerted USMS to his work. Meyer is a member of Central Maryland YMCA Masters and a young 62. Like many swimmers he was curious about how his times stacked up against what he did in the past and how they might stack up as he, and his age group, ages.

Well, remember the old adage about curiosity killing the cat? Meyer is still alive, but slightly disheartened by what he found. Apparently, swimmers aren’t slowing down as they used to. Whether it is due to better training, better nutrition, better health care, a culture more supportive of older athletes, more time, or simply more desire, a 60 year old swimmer is swimming faster today than a 60 year old swimmer was in 1980.

So the good news is that you don’t have to slow down, but the bad news is that your age group won’t either. At least, not until you are all over 75. There are limitations in the analysis Only backstrokers were examined, for example. But we all know people who are swimming as fast, nearly as fast, or faster now that they were ten years ago.

Of course here at USMS, we’d like to think this increase in speed is due to the growth of U.S. Masters Swimming. We have more clubs, more coaches, and more swimming opportunities for adults of all ages than existed in 1971, when USMS began. If you build it, they will come. Enjoy Meyer’s analysis!

Abandon hope, all ye who think that aging up is going to improve your prospects!
by: Jerry Meyer

These four graphs quantify something I've suspected for a while. The first two graphs (pictured above; click on the image to enlarge it) plot Men's National Top-10 times for two events (50 and 200 backstroke) as a function of age. The times slow down with age, as one expects, and there is also a substantial improvement if you compare the 2010 times with those of any previous year. (Several previous years are examined in 5-year increments, going back to 1985).

The cyan (light blue) points are my own times, which show that 20 years ago my 200 backstroke would have been nationally ranked. One could also surmise that if I hold the same time until age 65 I would be at the national qualifying level (10% higher than the 10th place), and by age 70 would be in the top 10. So all I have to do is hang on. 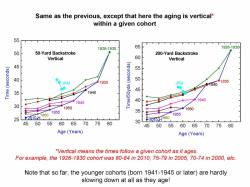 But the second set of graphs (pictured right) plot the times vs. age vertically rather than horizontally. By this I mean that the times follow multiple groups of swimmers, starting with those born between 1926-1930, as they age. So in 2010 the 1926-1930 babies were in the 80-84 age group, in 2005 they were in the 75-79 age group, etc. back to 1975 when they were in the 45-49 age group. Plotting that way we find that the older cohorts (born 1940 or before) are steadily getting slower with time as expected. But the younger ones are hardly slowing down at all. In several cases, they are actually speeding up as they age! So the target is moving so fast that even if I keep the same time until age 70, it will still probably be well below the qualifying time cut-off for the current crop of ageless swimmers in my group.

So why bother to get older?

Why I Love Swimming

Staying in the Water