Swimming for yourself and others

Grateful to Be Swimming

Pam McFarland’s trip to Long Course Nationals this year was, as her husband put it, “a victory comeback to competing.” Rather than showing up expecting her previous times to fall and records to be set, McFarland showed up in Indy with gratitude, a great attitude and the support of her team, family, and her doctor. The fact that she was competing at all was indeed a victory.

In September 2008, McFarland, 43, of Swim Kentucky Masters, developed a stubborn cough. Thinking she had bronchitis, she went to her doctor, who initially put her on antibiotics and steroids. When these had no effect, she also consulted an allergist. After several consultations and medications that did not alleviate her symptoms, McFarland’s lungs were X-rayed.

The X-ray revealed a baseball-sized mass, a thymoma, in her lungs, which had been putting pressure on her windpipe, causing the chronic cough. McFarland was scheduled for a radical thymomectomy in December, an operation that required cutting open her breastbone.

Prior to the surgery, McFarland told her doctor of her intentions to swim at Nationals: “He knew how important it was to me and kept that in mind as he kept to a minimum the splitting of the sternum,” says McFarland, adding, “He knew how often I wear bathing suits!” Her doctor, Jay Zwischenberger, or Dr. Z, told MdFarland that she had the lungs of an 18-year old, probably due to all her swimming. 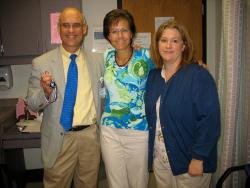 McFarland was out of the water for about six months, and then gradually eased back into it. With Nationals right around the corner now, she was a little apprehensive about attending, but quickly put things in perspective. “I needed to get back into that environment. Even though my times are far from Olympic standards, the friendly camaraderie and shared passion for swimming was something I needed to look forward to,” she says, adding “Swimming is such a vital part of my life; it keeps me mentally and physically stable.”

After Nationals, she presented one of the medals she won to her doctor. “I figured he deserved one since he made it possible for me to continue to swim!" 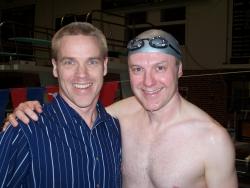 Shaun McCarthy attended LC Nationals for one reason this past August; to swim the 1500M freestyle in honor of his coach, John Underbrink, whose untimely death from cardiac arrest a week before the meet shook McCarthy to the core. “He was an incredible person, and a wonderful friend; I am still grieving,” he says. “He was young, 51, and had a family history of heart problems, but he kept himself in great shape, a very healthy man,” shares McCarthy.

McCarthy, 49, moved to the U.S. from his native London, England about twenty years ago. He had always liked the water, but since swimming lessons around age three, had not received any formal instruction and had never swum competitively. Now a hairdresser in Plano, Texas, he says he was watching the Olympic swimming events in Beijing in August 2008 and was inspired to get serious about swimming.

He joined Dallas Aquatic Masters and after meeting with several coaches, he was introduced to Underbrink. McCarthy says he and his new coach hit it off immediately and friendship developed. “We were only friends for about 11 months before he died, but it was a deep friendship,” says McCarthy.

McCarthy was nervous about telling Underbrink the real reason he was so keen on getting professional coaching, fearing that he would be laughed at. But after several weeks, McCarthy says he revealed to Underbrink that he wanted to swim in the 2012 Olympics in London. A devout man, he added that he felt that his inspiration came from God. Underbrink didn’t laugh, and the two started organizing McCarthy’s training schedule, which amounts to about three hours per day in the water and two hours dry lands and weights.

McCarthy figured his chances of making an Olympic trial cut would be best in the 1500M free. However, last year he swam it for the first time, hitting, the wall in just under 45 minutes, nearly a whopping 30 minutes shy of the 2008 trial cut of 15:53.59. Not to be deterred, McCarthy pushed himself hard in his training and this year in Indy, shaved nearly 20 minutes off, coming in at 25:34.02. 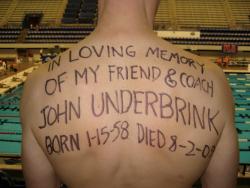 McCarthy says he is well aware that most people think he is crazy; that he will never make it. Once he got over his fear of being laughed at, he began telling anyone who would listen; friends, customers in his shop. He categorizes people into three different camps: His supporters are as excited as he is, and encourage him to go for it. “The fence sitters say ‘hey that’s great,’ and I can tell they don’t think I can do it, but they are far too nice to say so,” says McCarthy. The third group, the ones who laugh or say “yeah, good luck with that,” McCarthy just considers negative and he does not let it bother him.

For McCarthy, pursuing his dream vigorously is a way of honoring his coach and friend. After his 1500 in Indy, he had to rush to get to the airport to catch a flight home in time to attend Underbrink’s memorial service, which he says was attended by nearly 700 people. “He really touched people’s lives, he was that kind of guy. When he was coaching, he treated each and every one of his swimmers as though they were the most important priority for him.”

Swimming Through the Unemployment Ranks