How to Swim Breaststroke

Improving your efficiency can help you swim breaststroke faster

This article originally appeared in the January-February 2020 issue of SWIMMER.

A coach much wiser than I once said, “It’s only after you have exhausted every effort to reduce drag do you ever begin to think about going fast.”

This idea is especially relevant in breaststroke, because of its inherent up-and-down nature and all stroke mechanics happening below the surface except the breath (and, for some, part of the recovery). All aspects of forward-producing motions must be weighed against the possibility for drag.

Here’s how to build an efficient breaststroke that will have you swimming faster.

Your stroke starts with your hands initiating an out-sweep from the streamlined position just below the surface (see photo). A deep out-sweep makes for a deeper catch, pull, and recovery that has your hands finishing farther away from the surface and leaving your body exposed to more frontal drag for a longer period of time.

Your out-sweep should draw your hands past the width of your shoulders. At this stage, you should start your catch, bringing your hands back while keeping your elbows near the surface. 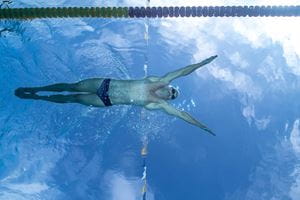 This will resemble early vertical forearm in freestyle. As your catch is anchored, your goal is to have your palm and forearm on the same plane and your fingers pointed toward to bottom of the pool, with perhaps a personal preference of slightly inward.

Once you begin to move from the catch phase to the pull, or power, phase, you’ll feel the muscles of your upper arms, shoulders, chest, and back engage. Allow your hands to lead the in-sweep, keeping your elbows stationary at the surface until your hands pass inside of them. This helps to keep your elbows and arms from getting caught too far behind your shoulders, which slows the arm recovery.

As your hands in-sweep toward your chin and chest, the engaged larger muscle groups provide the necessary thrust to continue the accelerated hand speed through the power phase of the stroke and into the recovery. What some swimmers lack is a sense of urgency to get back to a streamlined position. Be aggressive to the glide!

Another tendency for some swimmers is to try to accelerate too much during the out-sweep. This usually leads to a deceleration during the in-sweep and often results in a stroke pause under the chin. If this happens to you, your stroke cycle is beginning and ending in your most drag-producing position for a longer period of time.

No stroke sees more evolutionary changes than breaststroke. And to this day, no one way seems to work for everyone. But times continue to drop.

Part of the reason is as stroke tempos have increased, the necessity for a narrower and faster kick to match the hand speed is required to maintain your stroke timing. The concept varies with race distances (faster turnover for a 50 breaststroke, slower for a 200), and you’ll find the proper combination that works best for each of your races.

As your hands anchor in the catch position, slide your hips forward. This plays a major role in reducing drag, because it softens and rounds the angles of your upper legs to oncoming water, allowing water to run down your torso and legs easier.

If your hips didn’t slide forward, your knees would have to move on a more lateral plane, creating a much harder edge that would lead to more surface area of your thigh meeting water and creating drag. Your lower legs and feet should “hide” behind your thighs, so they aren’t exposed to as much drag-reducing forces. 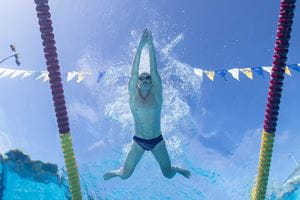 Your feet and ankles are turned outward to grab as much water as possible with the instep of your feet, and you should draw your feet as close to your butt as your flexibility allows.

With your feet cocked for the kick, your upper body should be in what I call a “narrow arrow” (see photo). This allows you to have the most propulsive part of your kick engaged when your body is creating the least amount of drag.

This explosive thrust of your kick should be more backward (pushing you forward, your goal), not outward. Finish each kick by bringing your feet together, so your feet are in a streamlined position. This is when you should start another stroke cycle.

Your body will always follow your head. Fight the urge to have every stroke begin with a lift of your head, because this taking of an early breath creates timing issues later in your stroke cycle. If you can see your hands move from the “I” position to the “Y” position, your head is in the wrong posture. At this juncture, your eyes should still be looking down at the bottom of the pool.

You should begin exhaling during the out-sweep phase of your stroke and continue as your forearms move from the catch phase and start the power phase. The increased hand speed combined with the sliding forward of your hips to set up your kick creates a rocking motion that allows your head to ride this wave above the surface and grab a breath, with your head always moving more forward than up and down. Once you take a breath, snap your head back into alignment with your arms as your hands shoot forward and back into a streamlined position.

Mastering the synchronicity of the pull, kick, breath, and glide is what separates really good breaststrokes from the rest of the field. Here are some key points to keep in mind to help with your stroke timing.

About the Author
Kerry O Brien

Walnut Creek Masters Head Coach Kerry O’Brien was the 1987 U.S. Masters Swimming Coach of the Year Award recipient and is the namesake of the USMS Kerry O’Brien Coaches Awards, which are given annually to coaches whose passion and dedication help them build USMS membership in their communities.

Three Steps for Mastering Your 200s

Try These Drills to Master Breaststroke

How to Master Your IM Turns