Information abounds about early vertical forearm and the importance of EVF in establishing an efficient pull in freestyle. I've even posted several articles on my club website about EVF. But I've noticed a funny thing with my swimmers: It can be a tough concept for them to consistently display EVF in their stroke. It’s one thing for our brains to grasp the notion, and quite a different beast to truly incorporate EVF into our freestyle on a regular basis. It took me months to begin seeing this in my own freestyle, and I still have to concentrate on it, especially when I’m tired.

We know that it is the act of pushing water backwards that propels us forward. When we press down on the water with a straight arm, we impede the ability to gain traction early in the stroke and push that water back. But, let's admit it—the action of EVF really is a bit awkward requiring a delicate balance between strength and flexibility. Anchor your hand, internally rotate your shoulder ever-so-slightly (without changing the pitch of your hand), let the elbow externally rotate out, and get those fingertips pointing downward without breaking at the wrist. Huh? Even some pretty high-level swimmers and athletes who have an amazing mind-body connection still struggle to adapt to and adopt EVF. But it is not a lost cause, and it is a cause definitely worth pursuing. I’ve recently found three tools that seem to help. One is a physical tool and two are visual aids.

For the physical tool, a foam roller just might do the trick. The fatter the foam roll, the better. Have your swimmers stand in shallow water, floating the foam roller horizontally in front of them on the top of the water. Have them place their fingertips (straight out from their shoulder) on the roller and slowly and gently slide their fingertips, wrist, and forearm over the roller and then straight down (not out). Have them stop this slide after their elbow crests over the top of the roller.

Cool things happen! Their shoulders should internally rotate while their elbows externally rotate. As this happens, their fingertips begin their point downward toward the pool bottom. Let them do this several times, one arm at a time. 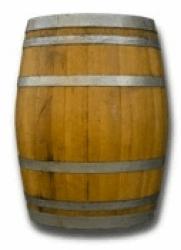 Now take it a step farther. We want a bigger object than a foam roller for their mind to wrap around. Let's go for the concept of a wine casket or small barrel.

Ask them to envision rolling their fingertips, wrist, forearm, and elbow over the barrel each time they insert their arms into the water. Start with some one-arm swimming (where the other arm is resting out in front). Give them a chance to do this on both sides. After a few rounds of that, have them swim a lap of freestyle to see if they can emulate the feel. If not, start back at square one with the foam roller. You can also try the one-arm drill, but this time, have the non-stroking arm down by their side. This adds the element of needing to rotate from the hips and engaging the core.

Now, for another visual aid, think of an ice block. I got this idea from Coach Stu Kahn of Davis Aquatic Masters (2012 USMS Coach of The Year) who wrote about it here. Once your swimmers have the beginning part of EVF established, they need to continue into a late vertical forearm or LVF. This is where the ice block comes in. The ice block concept really helps reinforce the point that we must push water backwards to go forwards.

Picture yourself grabbing onto a large block of ice in front where you make your initial anchor and catch. You pull the ice block (cresting over the top like the barrel) until you go from EVF to LVF, which is at that 90-degree mark where your fingers, wrist, and forearm are pointing down to the pool bottom. From that point, you push the ice block back, hence the need for the palm pushing back to your hip. Once your hand has reached your hip, you release the block and enter into the recovery phase.

Of course, there is so much more to mastering EVF than just these three tools. Having good extension, good rotation, and proper alignment are also factors that set up for an effective EVF-based pull. There are two videos I find very helpful from Glenn Mills at GoSwim. “Freestyle–Inner Elbow Extension” and “Freestyle – Simple Catch Practice.” Each is terrific for setting up the proper position for the anchor and getting the most out of the catch.

Good luck with your swimmers and EVF. Keep exploring with toys, tools, and tricks! Share your ideas with the rest of us on how you tackle some of the stroke technique issues we all encounter.

About the Author
Cokie Lepinski

Cokie Lepinski is a U.S. Masters Swimming Level 4 coach and the recipient of the 2014 USMS Coach of the Year Award. She lives in Arizona and coaches the Sun City Grand Geckos. She is the author of the e-book "There’s a Drill for That."

Swim Faster by Making These Adjustments

How to Get More From Your Freestyle Pull

How to Have a Great Freestyle Recovery

Try These Drills to Master Breaststroke