So much happens at USMS conventions!

The annual United States Aquatic Sports convention was well attended in the Windy City this past September 15 – 20. Hundreds of representatives from USA Swimming, USA Diving, USA Water Polo, USA Synchronized Swimming and U.S. Masters Swimming came together. Friends reunited, athletes shared their experiences, concerns and ideas and organizations made progress with the help of their staff and volunteers. U.S. Masters Swimming was as busy as usual and conducted legislative business, elected new officers, and honored volunteers. USMS volunteers and staff worked diligently to represent their fellow Masters swimmers and guide the organization in a positive direction.

One of USMS’s convention tasks this September was the election of new officers. The below list includes new members of the Executive Committee.

These new officers will not only serve on the Executive Committee, but will also join the U.S. Masters Swimming Board of Directors.

The Ransom Arthur Award is given annually to the volunteer who epitomizes the spirit of Captain Ransom J. Arthur, the founding father of U.S. Masters Swimming. In 1970, Capt. Arthur envisioned lifelong fitness and lifestyle benefits for adults through aquatic training and competition. Each year, the recipient of the Ransom J. Arthur award has demonstrated top-tier commitment and dedication to the mission of USMS. The 2009 recipient is Julie Heather, from the Southern Pacific LMSC.

Every year USMS honors a coach who exemplifies the highest standards in Masters coaching, including growth and development of Masters swimming with an all-inclusive approach, one that welcomes swimmers of all levels and abilities. This year’s Coach of the Year is Nancy Kirkpatrick-Reno of the Conejo Simi Aquatics Masters. 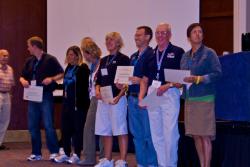 The June Krauser Communications Award is presented annually to an individual whose communicative efforts have contributed to the growth, improvement, or success of U.S. Masters Swimming. The award is named for June Krauser, the original author of USMS’s first official rulebook and a prolific writer and editor of many newsletters and other publications in the Masters swimming world. This year’s recipient was Meg Smath. The Mountain View Masters Swim and Social Club won the Newsletter of the Year award for their monthly publication, The RipTide. 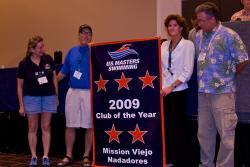 U.S. Masters Swimming considers club development a priority, and recognizes a club every year with the Club of the Year Award. Masters swim clubs who do the most to promote the values and mission of U.S. Masters Swimming, not only in their communities, but also at the national level, are candidates for this award. This year several excellent clubs were nominated and the Recognition and Awards committee, for the first time, selected two deserving U.S. Masters Swimming clubs. The two clubs to receive the award were the Mission Viejo Nadadores Masters and the Noblesville Adult Swim Team.

The Raleigh Area Masters Team, in association with USMS, honored Barry Fasbender with the Championship Meet Award for his work behind the scenes in compiling and formatting computer data for USMS’s national championship meets. 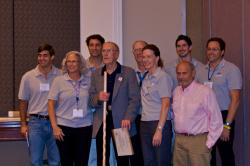 Lastly, 2009 is the inaugural year of the Ted Haartz U.S. Masters Swimming Staff Appreciation Award. The staff recognizes one individual each year who demonstrates excellence in assisting and supporting the U.S. Masters Swimming staff in the national office with its professional duties of servicing, promoting, and building our membership. This award celebrates the organization’s volunteer roots, as well as its future, specifically by recognizing efforts that support and assist the staff in its responsibilities. 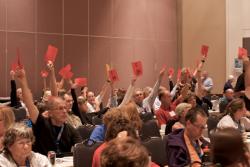 When the new Board of Directors convened, three task forces were formed: Membership Dues will charged with looking at what are members are charged, when they are charged and what is the best strategy going forward. End-to-End Management will look at how to better support and grow events utilizing new technologies and resources. And the third, tentatively titled “Workout Groups,” will look at how we gather information about and recognize the chapters and affiliates that are part of LMSC statewide clubs.

The dissolution of several committees was voted in as the new national office staff has assumed many of the duties previously performed by these committees, including the Marketing, Communications, Publications Management, and International committees.

The Coaches Committee voted to create a Masters coaching certification program in partnership with the American Swimming Coaches Association.

The House of Delegates voted to make the Finance Committee a standing committee of the Board of Directors, and the Board created an Audit Committee. Both the Finance and Audit committees are charged with financial oversight of the organization.

The House also voted in a new committee for LMSC development, charged with strengthening governance and operation of LMSCs by providing education and mentoring for LMSC boards and officers.

The Fitness Committee was renamed the Fitness Education Committee, and announced that the 2010 Check-off Challenge would be hosted by the Colorado Swim Dogs. 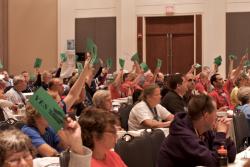 And lastly, the Championship Committee shared that they have selected Mesa, Ariz. to host Spring Nationals, and Auburn, Ala. to host Summer Nationals. The committee also voted to use the seasonal names going forward in an effort to make the meets more easily understood by those outside the sport.

U.S. Masters Swimming continues to grow. With this growth, efficient and effective volunteers and staff are essential. The 2009 USAS Convention was not only a success by these standards but also left its attendees with a sense of “We did it!” We are moving forward and continuing to build upon the strength of our foundation that was built by volunteers, coaches and athletes. Each current member of U.S. Masters Swimming has a voice, can be heard and is invited to be a part of the growth and success of our organization. U.S. Masters Swimming encourages all members to share their ideas and opinions.