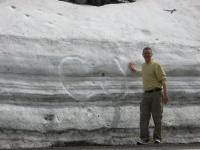 I would like to contribute more to USMS by being elected secretary. My job as a Project Management Director, as well as having served as my LMSC secretary as well as several other organizations, uniquely qualifies me for the position. If elected, I would like to focus on communication as a means to improve USMS and promote intelligent growth -- increasing our membership as an outgrowth of us getting the message out that USMS has something to offer everyone.

Probably the most crucial issue is dealing with growing pains as our organization expands. As our membership has increased, even day-to-day operations have become a challenge. To do more than simply maintain the status quo, we must change the way we operate, a process already well under way since we had hire an Executive Director. At the same time, we must not alienate our core membership-growth for growth's sake will wind up disappointing both current and future members. Increasing our membership must be an outgrowth of us getting the message out that USMS has something to offer. In other words, communication is absolutely fundamental. And communication means being willing to listen too. We need to tell the world about ourselves, but we also need to listen to what the active adult population is asking for, and if necessary and feasible, be willing to adapt to meet those needs. And we need to provide more services to our non-competitive members, while maintaining our commitment to those who do compete. If elected, I would gather and evaluate information, and make appropriate recommendations and decisions.

I’ve already performed in the Secretary position for two years, and would like to see it through. Plus I have had a blast learning from all the members of the Executive Committee and Board of Directors.